With Skilling, you won't need a guard goat. Though if you want one, by all means. Goats are cool.

Skilling is into Extreme Privacy (EP) (OK, I made up EP, but still, Skilling does it).

FERPA is the most important education data privacy legislation in the US. Skilling was designed with FERPA in mind, but only the regulations that apply to students 18 and older. The rules for children are more complicated.

How does Skilling implement privacy? Let's look at some issues. 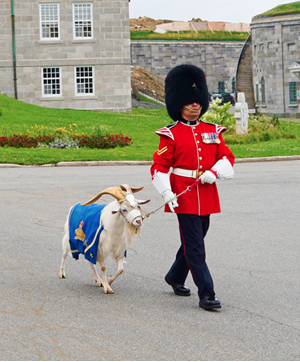 Drupal has a typical permissions system to control data access. Users are given roles, like Student, and Instructor. Role have permissions. For example, students can create submissions. Instructors can edit calendar events. Both can view lessons.

That's fine for most uses, but is it enough for us? For example:

Should instructors have access to all student exercise submissions?

Well, of course. Without access, how do I do my job?

OK, you tricked me.

Not at all! You have to think about many different cases, and plan accordingly.

Skilling enforces strict privacy rules. It does so by adding enrollment checks. The rule for this case is something like:

Allow access if all of the following are true:

Here's another one: should graders know who is submitting the exercises they are grading? That's been standard practice for decades (centuries?). Instructors have graders, who mark student homework, and record grades in a grade book. They have to know who turned in the homework, so they can record grades. Right?

You want me to say, "Of course, they have to know!"

Ha! I'm not falling for that again.

OK, you're onto my tricks. With automation, it's possible to have graders grade, without knowing where each submission came from. This is from the grading system:

You might not want to withhold student names. It depends on your situation, and the relationship you want between graders and students. Withholding names is the default, but you can change that in configuration.

This isn't enough if you want some fields to be restricted to some users. For example, it would be convenient if authors could add private notes to lessons, perhaps ideas on how to improve lessons. However, they might not want students to be able to see the notes. Perhaps instructors can see the notes, but not change them.

Drupal is general-purpose. It can be used for thousands of different tasks. Generality is achieved by abstraction. So, not only is the code complex, the relationship between code and data is difficult to understand without special training. Even finding the code that controls access to a field can be challenging.

What does mean? Through-the-system auditing is not practical for auditors without training in Drupal development. Or Banner development, or SalesForce, or whatever. Almost all auditing is around-the-system.

Unlike Drupal, Skilling is not general purpose. It helps build and run skills courses. That all it does.

Skilling's security code is not general. It is centralized, and specific to Skilling's architecture. If the code can be open to inspection, if it's written to be.

Here is a code fragment controlling access to the notes field of lessons:

I'm not a programmer. Why show me this?

Give it a chance. Read the code, and see if you can figure out whether students have view access to the notes field of lessons. Hint: || means "or."

Right! That's auditing through the system. The rules are explicit in code.

This is not elegant code. It is, however, easy to understand, and easy to test. Auditors see exactly how privacy policies are implemented. They can run the code themselves. They can add breakpoints where they want. Remember, it's open source, so auditors have the actual source code, not just the compiled result.

The downside of this approach is loss of flexibility. Administrators can't expose any data they want, without having the source code changed.

There are exceptions to this. For example, an administrator could add a field showing whether a student has a disability. Authors could test that field in lessons, perhaps showing extra content to those students. This would require no programming. In general, however, Skilling's privacy rules are hard-coded.

These policies are open to change. If the community has use cases needing different policies, let's talk about it. As long as new policies are justified, implemented well, and documented well, they can be adopted.

So far, we've talked about privacy, mainly. What about security?

CSRF and XSS prevention, DoS mitigation, SQL injection defense... they are all built-in to Drupal. You can read more about Drupal security.

Adela, what's the most common reason that sites are hacked?

A reasonable guess, but that's not it.

When a security risk is discovered in software, the developers issue a patch, a fix to the code. Many administrators don't apply those patches. They just let the software get more and more out of date. Sooner or later... hacky hacky hackity hack.

Drupal has a security team. It issues patches, and lets people know about them. You can apply patches easily, if you've installed Drupal in the way recommended in Skilling's installation documentation. Basically, type in one command to update a module, or Drupal core. That command is explained in Skilling's maintenance documentation.

Skilling uses Drupal's existing security mechanisms as much as possible. For example, when students submit exercise solutions, they use Drupal's form system. The form system has built-in security checks. For instance, Drupal forms include tokens, protecting against CSRF attacks.

Some parts of Skilling use client-side Ajax code that is not a standard part of Drupal. For example, the grading interface is implemented in Vue, a framework for making rich client-side JavaScript applications. However, every Skilling Ajax transaction runs against a server controller that invokes Drupal services for token validation, etc.

Apart from issuing patches, Drupal's security team inspect modules, that is, Drupal extensions, like Skilling. Skilling has the security team's seal of approval, as you can see on Skilling's Drupal project page. It looks like this:

GDPR is the EU's rule set about data privacy. Retro-fitting software for GDPR compliance can be expensive, and manual compliance... let's not even go there.

Skilling was written with GDPR compliance in mind. See history for deets.